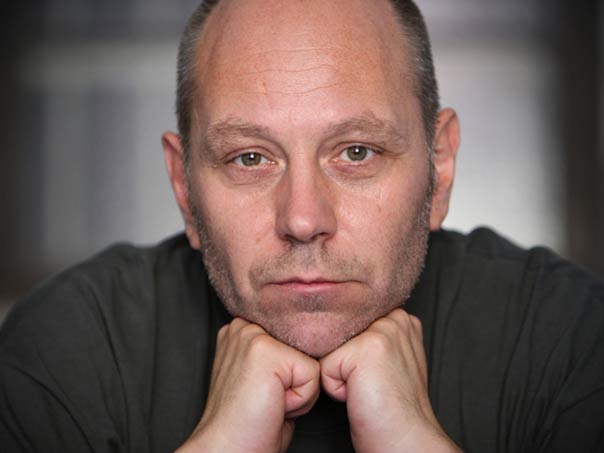 Milko Lazar, born in 1965, is a slovenian composer, pianist, harpsichordist and saxophonist, based in Ljubljana and is currently working freelance in the fields of contemporary classical and jazz music. He studied classical piano, jazz piano and saxophone at the Music Academy in Graz, Austria, harpsichord and baroque music at the Royal Conservatory in Den Haag, Holland. Although he composed from an early age, he never studied composition officially, only privately occasionally. For 15 year he was engaged with Big Band RTV Slovenia as a solo saxophonist and composer- conductor. Among other orchestras abroad (Staatsorchester Stuttgart, Augsburger Philharmoniker and Philharmonia Zurich) he is regularly composing for two of the best symphonic orchestras in Slovenia – The Slovenian Philharmonic Orchestra and the Radio Symphony Orchestra. During his jazz career (from 1984 to 2004), he was performing with several groups of his own (Quatebriga, Stefbet Rifi, Milko Lazar Quartet) and other well known jazz musicians like Maria Schneider, Herb Pomeroy, Peter Herbolzheimer, and Mathias Ruegg. With his own groups, he participated festivals like Perugia Jazz Festival, Leverkussen Jazz Festival, Jazz Nad Odra – Wrotzlav, Ljubljana Jazz Festival, Hannover Expo 2000, Alpentone Festival – Altdorf (CH) and many others. He recorded over 50 LPs and CDs with different ensembles and 30 solo projects. His opus includes large number of orchestral works, operas, chamber works, vocal and jazz compositions and works for contemporary ballet performances. Most of them have already been performed by his or other international ensembles all over Europe, USA, China, Rusia and South America in prestigious venues such as Carnegie Hall, Merkin Concert Hall and Steinway Hall in New York, Kennedy Center in Washington D.C., Fine Arts Building in Chicago, Teatro Camoes in Lisbona, Slovenian National Opera in Ljubljana, Theatre Mikhailovsky in Sankt Petersburg, Nybrokajen 11 Hall in Stockholm, Opernhaus in Zürich, Opernhaus in Stuttgart and many others. Among the conductors of his orchestral works one finds such names as Walter Proost, David de Villiers, Olari Elts, George Pehlivanian, David Itkin, Anton Nanut, Luca Pfaff, Mikhail Agrest, Pedro Halfter, James Tuggle, En Shao, Dmitrij Liss and Marko Letonja. Besides orchestral and chamber works Milko Lazar regularly composes for numerous film producers, theatres and dance performers in Slovenia and abroad.

As a pianist, he is performing regularly in duo with pianist Bojan Gorišek and with percussionist Zlatko Kaučič, as a harpsichordist with Russian violinist Vasilij Meljnikov and Slovenian flutist Matej Grahek and with his own trio “Lazar Drevenšek Juhart” (M.Lazar – harpsichord, Matjaž Drevenšek – saxophones, Luka Juhart – accordion), playing mostly his own works. From 2008 he is regularly working and performing with world known dancer and choreographer Edward Clug. Together they have made fourteen ballet performances in Slovenia, Switzerland (Zurich) Portugal (Lisbon), Germany (Stuttgart, Augsburg), Austria (Graz), Croatia (Zagreb), Holland (Den Haag), Serbia (Belgrade) and Rusia (Sankt Petersburg). He has been awarded with the most prestigious national award for art Prešernov sklad Award in 2005 and the city of Ljubljana art award Župančič Award in 2010 for his orchestral and chamber works.