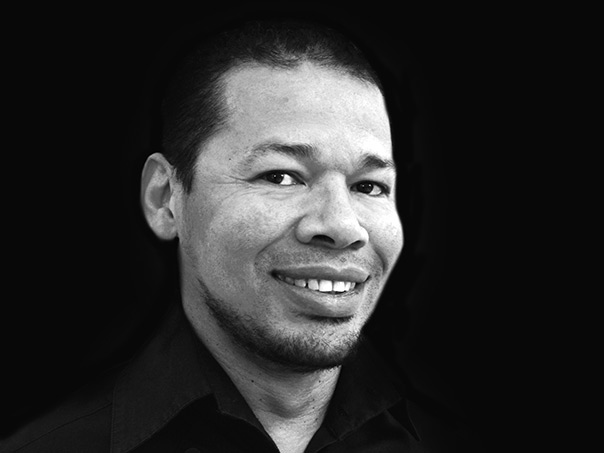 The fashion and costume designer was born on the Caribbean island of Curacao. After training as a tailor in Leiden / Netherlands, he studied fashion design at the University of the Arts in Utrecht. After graduating in 1997, he completed a training course in textile molds at the Hogeschool Rotterdam. From 1996 to 1998, Angelo Alberto was an assistant to Edgar Vos Couture's haute couture collection in Amsterdam, before moving to the Costume Department of the Staatstheater Nürnberg. There he assisted in numerous costume designs of the Tanztheater Nürnberg and created his own projects. His work brought him orders u. a. by Benita Roth, Daniela Kurz, Rui Horta and Yuki Mori. Freelance he worked u. a. with Barish Karademir, Bjorn Ballbach, Lukas Scheja, Kuno Windisch and Melanie MacDonald. In 2007 he created the costumes for the ballet evening "Dance AMONG Friends" at the Augsburg Ballet with choreographies by Roberto Campanella, Emily Molnar and Itzik Galili. 2008 saw the involvement of ProArteDanza in Toronto for Emily Molnar's "As for it now" and Kevin O'Day's "We will ...". In 2010 he designed the costumes for Gaetano Posterino's "Stravinsky Trilogy" in Augsburg. In 2012 he worked for the Ballet Ulm and created the costumes of "Romeo and Juliet" in a choreography by Roberto Scafati.

The most recent works for Goyo Montero are the costumes for his world premieres "Imponderable" with Acosta Danza (2017); and "Asunder" with the ballet Perm, premiered as part of the Contex Dance Festival Diana Vishneva (2017). With the costume designs for the choreography "What remains" of Gentian Doda Angelo Alberto made his debut at the Staatsballett Berlin. His most recent work has taken him back to Cuba in Acosta Danza: Angelo Alberto created the costumes for "Satori" here for Raul Reinoso Acada.